“A stinker of a list” —Herald Sun
“Highly commend it to you… it’s actually quite a thing to behold” —Raf Epstein, ABC Melbourne 774
“Taking local knowledge to another level” —Fox FM Melbourne
“Mr. Borrie and his research team have travelled across Victoria” —Leader Community News

Q: Are you taking the piss?

A: No. The public toilet, just like the rec reserve and the public hall, is one of the pillars of any self-respecting Victorian community. Wherever you might travel throughout this great state, you’ll find a welcoming blue sign proudly pointing the way to a free public shitter. That’s cause for a bloody great celebration—and a dedicated website. 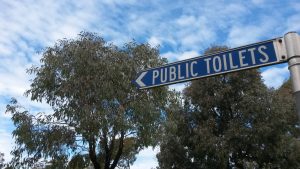 Q: How do you choose which public toilets to include on Public Toilets of Victoria?

A: We are drawn to certain dunnies by a mysterious yet unwavering vibe. To sense this vibe, ask yourself the following: is the dunny of a stout construction? Is there a gum tree visible from the entrance? Is the toilet proudly placed, rather than hidden away? Does it reek of local character (among other things)? Is the loo roll of the smeary wax-paper variety? Were you sent there by the local bakery, who will not let you use their toilet even if you buy a king sized sausage roll?

Q: Do you actually recommend using the public toilets that you feature on this site?

A: No comment.  At any or all of these locations it is possible you will be chased out of the cubicle by dunny budgies or have a spider attempt to leap up your bum. Possibly the only thing more Australian than a locally designed and built dunny is the desire to avoid actually using said toilet for anything more than a quick wee. That’s why Public Toilets of Victoria can’t be arsed reviewing public toilets. We simply chronicle them for the benefit of the nation. 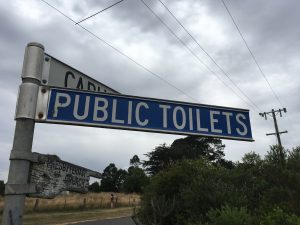 Q: Is it un-Australian to pay for a poo?

A: Yes it is. Make no mistake—in public toilet terms, Australia is a socialist paradise, founded on the earnest belief that every person in this great Commonwealth should be able to relieve themselves, for free, in a publicly owned dunny.  It’s enough to make one’s bladder swell with pride.

Compare this to vast reaches of the globe, where it is possible to travel for weeks without finding a single free public toilet. Instead you must fork out your hard-earned to an attendant or coin barrier for the very privilege of going to the toot. A bloody outrage!

It is our sacred duty to never, ever pay to enter a toilet block on Australian soil. Even if life-threateningly desperate, Real Australians would rather get admitted to hospital (also free) than pay for a poo.

Q: What do you think of those fancy, stainless-steel, automatic, self-cleaning public toilets?

A: Bloody awful. A third of the population refuses to use them out of fear of being trapped in there and squirted by the cleaning robot. Another third refuses to use them after the electronic “lock” button malfunctioned on them once, leading to unwanted visits from members of the public. The final third (of which Public Toilets of Victoria is a member) recognises that they are soulless wastes of money with no contribution to the National Character whatsoever. This one alone cost $453,400! Better instead to build a simple brick shithouse with no roof and employ someone to hose it down every second Sunday. Jobs!

Q: What are the greatest two uses of taxpayer dollars in Australian history?

A couple of months ago, I, Mr. Borrie, had the ple

The humble bat has had a rough year! Much publicit